Jim: From Cancer to Crossfitter

by Ricky on April 9, 2012
in Fat-loss, Fitness, Inspiration, Workout of The Day 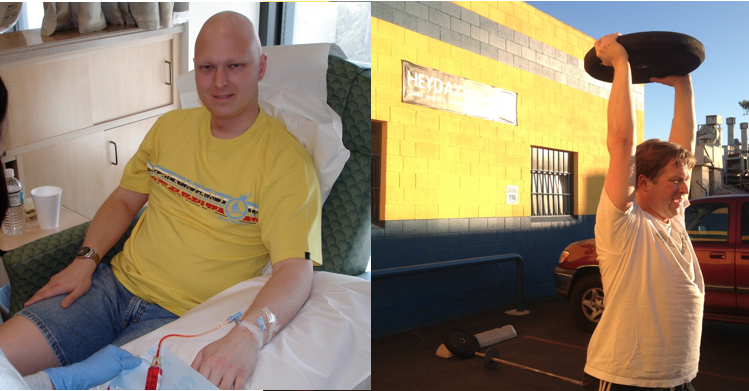 As you know in 2 weeks we have the Port Town Throwdown and Heyday 5k for a cure to raise money in the fight against Leukemia and Lymphoma Society.

What many of you may not have known is that one of our own HD members had his own battle with Lymphoma.

Jim Wiley, who at the time was training with me at another gym, got a biopsy on what was a seemingly benign lump. It was however a cancerous tumor. He was diagnosed with Lymphoma and would have to undergo chemotherapy.

In an instant his whole life, which was just getting started, was turned upside down.

Jim was in his early thirties when he began the battle of his life. For several months he had treatments, and all the while he kept training. I had no idea it was possible to keep exercising amidst a bout with cancer and yet 3 times a week Jim came and worked out.

I’ve heard every excuse to skip a workout, none more valid than a life-threatening disease, and here Jim was pumping iron with cancer!

It was heartbreaking to see him go through that but whether he knew it or not, it was incredibly inspiring to see him overcome such adversity. It is a constant reminder of how precious life is and that good health is a gift and not something to be taken for granted.

Jim battled his cancer and won. He has been in remission for several years and has since gotten married.

Jim will be running in the 5k.

If this inspires you, we’d love you to Join him by clicking here.

You can run or donate or both. All your help and participation is greatly appreciated!

It that isn’t a comeback worth celebrating, I don’t know what is.

NOTE: No Saturday WOD at the GYM. Instead there will be a Trail Run. Details and sign-up (so we know who to expect) will be in the Gym.