As many of you know we recently completed the Heyday Transformation Challenge. It was 40 days of dedicated portion control and the elimination of certain foods from their diet.
Most of those people chose to do Paleo. Forty days of meat, veggies, nuts, seeds and some fruit.
They cut out dairy, legumes, grains, and processed foods. Basically, anything with a wrapper.
It was tough but at the end, we had some staggering results (which you will hear about in the coming weeks).
One of the biggest obstacles to completing a challenge like this is fitting it in to all the craziness of life. Work, the weekend, kids, birthdays, weddings, vacations, it all gets in the way of making something like this convenient.
Many people are able to go a little while but then they fall off.
I wanted to talk to someone who knows what it’s like to be busy, to have kids, a marriage and a mortgage. Someone who has managed to stay in amazing shape as she enters her forties and is only getting better. I figured talking to someone like that could maybe help you figure it out yourself.
Recently I had the pleasure of interviewing a fellow CrossFitter and gym owner. Her name is Meg Mottl.
She is the owner of CrossFit Kirkwood in St. Louis Missouri. She is married with two children.
Meg has an interesting story.
At 41, she has spent most of her life as a vegetarian. She is an avid CrossFitter who is currently ranked 21st in the CrossFit Games Open North Central Region (I am ranked 511th just to put that in perspective for you :)).
She is one spot from making it to Regionals.
She has a 300lb deadlift and weighs 130lb.
Oh and this is her doing a 195lb overhead squat…

(She has since beat that with a 205lb overhead squat.)
Needless to say, Meg is a badass.
Meg got into CrossFit around 2007 and was certified the following year. She was pretty active before that but says ever since she took up CF, it has brought to an entirely new level physically because she can do things she never really imagined herself doing. Since beginning her journey into CrossFit with her husband, and starting their own gym together, they haven’t looked back.
I reached out to Meg because I know she has a ton of wisdom and insight to share. She is a former school teacher turned business owner. She is married and has two kids. She is busy.
She was STRICT vegetarian for most of her life and has been STRICT Paleo for the last three years (her kids are too).
She has managed to keep herself fit and continues to improve every year despite being a busy wife, parent, CrossFitter, and business owner.
So she has dealt with a lot of the obstacles a many of us face, and in our conversation, she explains it all.
(If you want to listen to this in your car or on a run, be sure to download the mp3 for the full audio interview)
In this interview we talk about:

====
Here are a few questions from our interview:
[ois skin=”Meg Mottl Interview”]
Ricky: Can you tell us about you and your background?
Meg: My name is Meg Mottl. I had no formal athletic background whatsoever before I started CrossFitting, I did summer swim team a few years, I played softball a couple summers, I did some weight lifting and I loved it. I tried to run, but I just wasn’t good at it. I didn’t like it.
Right out of college I became a teacher, and I started dating my husband. We got fixed up at the gym by the owner. Rich, my husband, had been a power-lifter, he was a mountain biker, he’d run marathons. He had a huge fitness background. He played soccer his entire life, went to college on a soccer scholarship, so he knew what he was doing. He just trained his whole life. 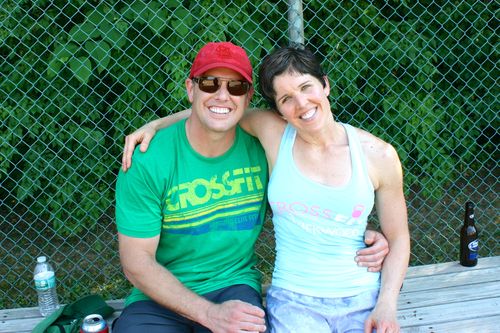 We worked out together the whole time we were dating, after we got married, and even after we had our 1st and 2nd child – we did our same gym routine.
There was a class called Fusion at the gym we were working out, and we noticed that his clients were sweating so much more than we were, and we were like, “What the heck is going on here?”. The trainer was playing around with CrossFit but he wasn’t CrossFit-certified. He’d just kind of been reading about it and he started these classes.
I kept telling Rich, “Come on, you would love it. You should go do it.” He did and he was addicted right of the bat. So different than anything he’d done before. Then, after a few months, he pulled me in. I thought I was going to be so sick and nauseated but I was like, “I want more!” This was so much harder than anything I’ve ever done in my life.

I didn’t want to give up too much of my kid time by going back to teaching, so I thought I’d just get CrossFit-certified and do that on the side. I made Rich go with me. So we got certified the summer of 2008. Then Rich found this little space in Kirkwood and he was like, “We need to do CrossFit Kirkwood. We need to do CrossFit Kirkwood.”
It all just snowballed  from there. We had no idea what we were getting into. CrossFit Kirkwood became my full-time job.
That’s how we started CrossFit.
Ricky: How about the food end of things? How did you arrive at Paleo?
Meg: I had been a vegetarian, I never liked meat. Never wanted to eat meat. It completely nauseated me when my parents told me that chicken actually came from the bird – the chicken. And when I found out where rump roast came from, I wanted to vomit. “Like a cow? You’re kidding me!”
When I was in seventh grade my parents finally gave up making me eat meat. I became a really strict vegetarian.
When Rich and I got married we started hearing about the Zone Diet. As we were playing around with CrossFit, we got pretty strict with it. Rich dropped probably 20 pounds that way. I didn’t change that much. I didn’t feel that different.
Then, in 2009 two things happened: Laura DeMarco competed in the CrossFit Games and Robb Wolf did a piece on her on how she was a vegetarian-turned-Paleo after she attended one of his nutrition certifications. According to the article, after she  started eating meat, all of her numbers were up, she felt better, said her energy felt better, etc. The whole article was raving about that.
Then, also in 2009 Leah Polaski from CrossFit Atlanta, morphed over as well. She had been a vegetarian-turned-Paleo. Every time she came to our gym in St. Louis she looked leaner and stronger and she was just blowing us all out of the water. We were beating her when we started and then by the end she was just a beast.
I started to read more about Paleo. I didn’t want to do it because of the meat. After six months, I kept reading about it and then finally decided to try it for six weeks.
January 1st, 2010, we did our first six-week Paleo challenge. Rich lost another 15 pounds being strict Paleo. He’s 44 and he’s never been as fit as he is now. As for me, it took my body a while to adjust to eating flesh, but I never looked back. At the end of those six weeks, I was like, oh my gosh!  I’ve been super-strict Paleo for over three years now.
Ricky: Is it harder to be strict Paleo or strict vegetarian?
Meg: I thought it was much harder to be a strict vegetarian. You can find salads and vegetables everywhere but it’s like, “Oh. I don’t want cheese on that. Oh, what’s in the dressing? I don’t want cream sauces. Was this food cooked in the same place as the meat? “, you know what I mean? When you’re super-strict and don’t even do dairy or eggs, there are a lot of things that have dairy and eggs.
Ricky: Why do you think we need protein? What are vegetarians and people who are eating a low-protein diet missing out on?
Meg: When I got more animal protein in my diet, my energy levels were insanely better. From a plant-based diet, you can’t… the protein is not as high and it’s not as usable by your body. When you switch to animal protein, it has so much more of the minerals, just the amino acid profile is complete. Energy levels are much different. I got a lot leaner and stronger when I started to eat more protein.
[ois skin=”Meg Mottl Interview”]
Ricky: How much protein do you try to get each day?
Meg: I would guess that I get between a 100 – 130 grams a day. I weight about 130 pounds, so I eat about a gram per pound.
Ricky: What are the staples in your diet? Do you eat the same things over and over again? Do you have a lot of variety?
Meg: I think we’re all pretty much creatures of habit. Don’t you find yourself that way? You eat certain things pretty often and then you spice it up every now and then.
For breakfast I typically use coconut oil, spinach, sauté that down, then I’ll throw in eggs, scramble them up or fry them with the spinach. I’ll have guacamole and salsa with that. Sometimes I’ll add a pint of tomatoes.
After a workout I always do just plain water. The “Stronger Faster Healthier”– you know they make the fish oil. We use their Recovering Protein Powder, which is from grass-fed cows and it’s pretty clean, so I just mix it up with water.
Lunch, I’ll typically do a couple of spoons of coconut butter and almond butter as my fat. Rich prepares chicken breasts, bison burgers or ground turkey. We always have fresh eggs because we’ve actually got 7 chickens in our backyard for the cage-free eggs. We have a coop and everything, because we eat so many eggs and we were spending so much on the cage-free eggs at Whole Foods or Trader Joe’s. They eat grass and bugs. The eggs are so much healthier when the chickens are eating what they’re supposed to eat.
Also we eat cucumbers, tomatoes, pepper, whatever fresh vegetables we have on hand. We don’t eat oatmeal or any kind of grain.
Then dinner, 99 percent of the time I eat a huge salad — I call it my trough salad. IIt  takes me like 45 minutes to eat it. I just put olive oil and balsamic vinegar for the dressing. I love it!
So that’s pretty much what I eat every day.

Ricky:   What’s your attitude about how your kids eat? I know a lot of people have the attitude, “Kids are kids. Let them be kids. Let them enjoy the food. They have fast metabolisms. Your kids are Paleo as well, right? 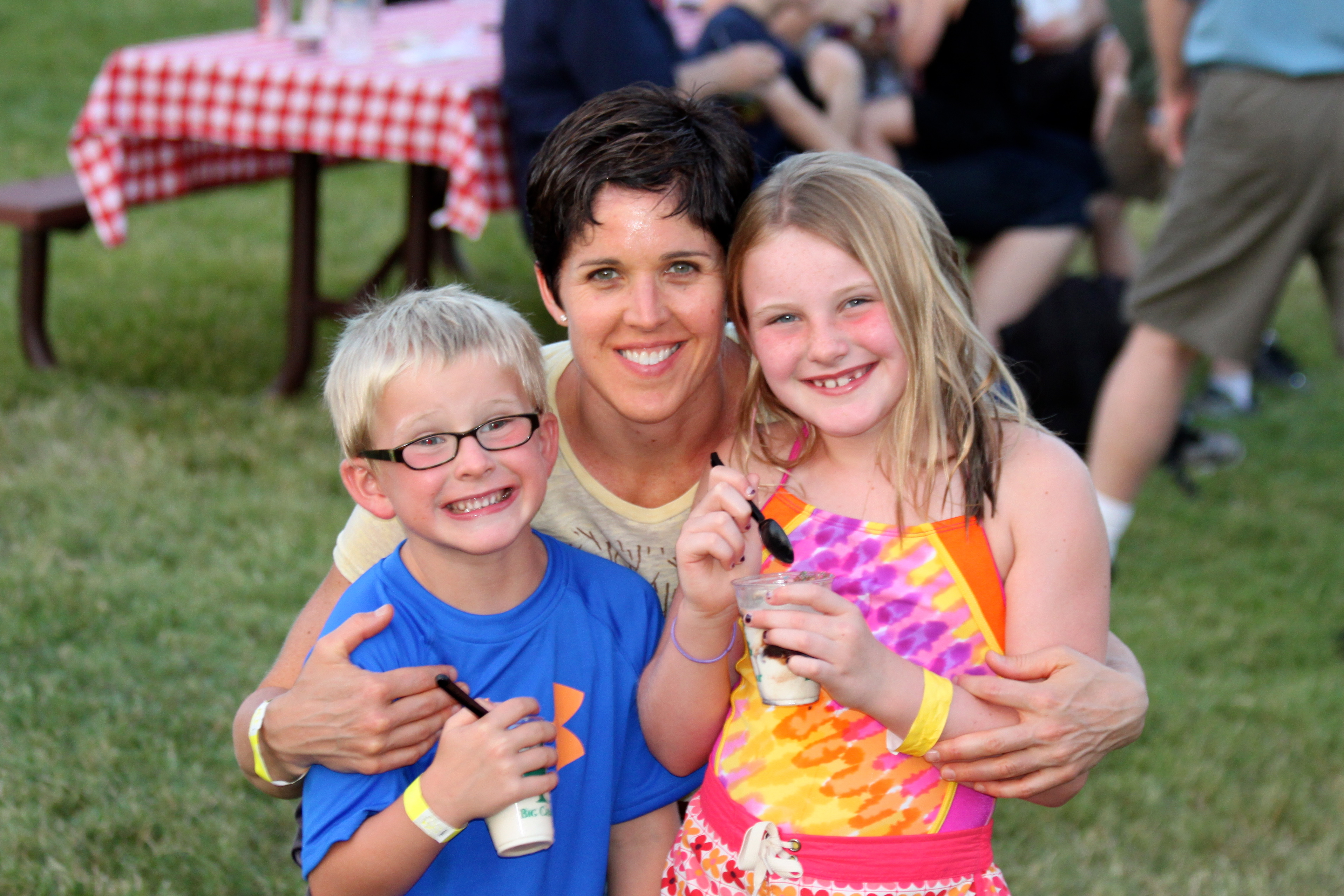